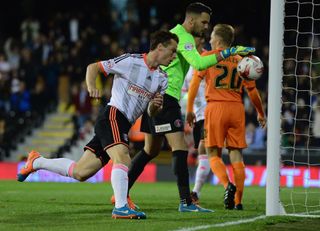 Charlton were slow out of the blocks in Friday's London derby at Craven Cottage and found themselves two down inside 12 minutes thanks to goals from Parker and Hugo Rodallega.

A second from Rodallega one minute from time made it four wins in six league outings for Fulham under caretaker manager Kit Symons, who continues to strengthen his case for taking the post on a permanent basis.

Following an 11-match unbeaten run at the start of the season, Charlton have now suffered two defeats in a week and missed out on the opportunity to break into the top six.

Parker was rested for Tuesday's 3-3 draw at Rotherham United and certainly seemed refreshed when he drove at the Charlton defence in the sixth minute.

The former England man's pass to Ross McCormack was overhit but the forward retrieved the ball and produced a first time cut-back to locate the on-rushing Parker, who finished calmly.

McCormack was involved again as Fulham extended their lead, firing in a shot that Stephen Henderson parried after Tal Ben Haim failed to clear. Rodallega was on hand to convert the rebound.

Tim Hoogland headed wastefully wide when unmarked on the end of McCormack's 32nd-minute free-kick and Rodallega rifled a volley over in the final minute of a dominant first half from the hosts.

Charlton battled back well after the break, as Fulham goalkeeper Marcus Bettinelli often appeared uneasy under a barrage of corners.

The 22-year-old got down well to thwart George Tucudean, before Hoogland had a 57th-minute effort chalked off for offside.

For all Charlton's possession and pressure after the break, Fulham retained greater menace on the break and, after Lasse Vigen Christensen prodded wide on the end of a return cross from substitute Cauley Woodrow, Rodallega cut inside to leave a prone Michael Morrison in his wake and seal the points with his fifth goal of the campaign.