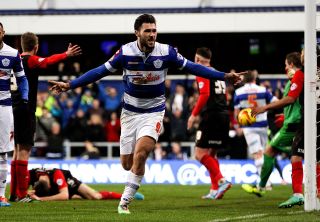 A Danny Ings brace saw Burnley triumph in October's reverse fixture, but a run of five winless matches followed and defeat this weekend would open up a six-point gap between Sean Dyche's men and the automatic promotion places.

QPR have won their last four league games, with former Burnley striker Charlie Austin netting four times during that period to take his season tally to 15 in all competitions.

But such form has failed to make a dent in Leicester City, who will chase a remarkable ninth-straight Championship triumph when they arrive at Bournemouth buoyed by an eight-point lead at the summit.

Derby County have taken seven points from the nine on offer since their 4-1 defeat at Leicester earlier this month and Steve McClaren's fourth-placed team will look to capitalise on any lost group from QPR or Burnley when they face a Birmingham City side on a run of three consecutive reverses.

Reading have rattled in 12 goals in their last two home games and will look to take that form on the road against struggling Millwall, for whom DJ Campbell bagged a debut goal to ensure a 1-1 draw in the relegation scrap against Sheffield Wednesday in midweek.

Campbell's parent club, Blackburn Rovers, are faced with an all-Lancashire clash against Blackpool, who are expected to travel to Ewood Park without Premier League-bound star man Tom Ince.

Wednesday take on some other fellow strugglers in the form of second-bottom Barnsley. Defeat for Danny Wilson's team against his former club would mean a nine-point deficit to their Yorkshire neighbours.

Huddersfield have fared little better, losing their last three, but they would leapfrog Leeds with a win.

Middlesbrough and Wigan Athletic shared a goalless draw on Tuesday night and the duo will continue their bid to break out of the mid-table pack at Doncaster Rovers and at home Charlton Athletic respectively – two teams embroiled in the relegation battle.

Ipswich Town – level on points with Brighton but above them on goal difference in seventh – take on out-of-soughts Bolton Wanderers a day earlier.