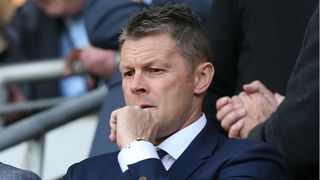 New Birmingham City manager Steve Cotterill was given a stark demonstration of the task that lies ahead of him as he watched the Blues suffer a 6-1 thrashing at the hands of Hull City on Saturday.

In a match featuring considerably less goalmouth action, Championship leaders Cardiff City were held to a goalless draw by Derby County, allowing Wolves to gain ground with a 4-0 win at Burton Albion.

Sheffield United fell behind Wolves to third thanks to a 2-1 defeat at Nottingham Forest, while Bristol City claimed an impressive 3-1 win at Ipswich Town and Preston North End drew 2-2 with struggling Sunderland.

Cotterill does not officially take charge at St Andrew's until next week after replacing the sacked Harry Redknapp, but he has a job on his hands to rescue Birmingham in their fight against the drop.

Hull scored three goals in each half to put their visitors to the sword at the KCOM Stadium, with caretaker boss Lee Carsley saying his side "folded a bit too easily".

Discussing a post-match changing room talk by Cotterill, Carsley explained: "It was basically that it starts on Monday, the season starts Monday. I only caught the last minute of it, but if I am sat there as a player I want to hear that there's a fresh start.

"Ultimately the season starts and the preparation for the next phase of games starts on Monday."

The result ended a five-match winless run for Hull.

Only Bolton Wanderers - beaten 1-0 at Aston Villa on Saturday - and Sunderland keep Birmingham off the foot of the table.

Neil Warnock's men failed to score in a home match for the first time this season as Derby claimed a point in the Welsh capital, although Cardiff stay top by a point from Wolves.

Leeds United could pull level with Wolves by beating Sheffield Wednesday on Sunday, but Middlesbrough's early promotion push is faltering - they drew 2-2 with Brentford at the Riverside Stadium on Saturday and sit 11th.

In the day's late kick-off, Norwich City claimed a 2-1 victory at Reading, who are now without a win in five matches and are drifting towards the bottom three.

REACTION: Hear from Neil Warnock and Gary Rowett on September 30, 2017

A run of four games without a win meant things were beginning to look bleak for Barnsley, but a first away triumph of the season should do wonders for their confidence.

Tom Bradshaw scored twice in a 3-1 victory for the Tykes at Millwall, a result that lifts them to 18th in the table.