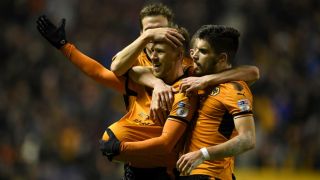 Ruben Neves, Barry Douglas and Diogo Jota were on target as Wolves cruised to a 3-0 victory over Brentford that stretches their lead atop the Championship to 12 points.

Nuno Espirito Santo's side look destined for a charge to the title and they showed little sign of slowing up at Molineux on Tuesday with all three goals arriving after half-time.

Neves opened the scoring with a fine free-kick in the 57th minute and less than 120 seconds later the advantage was doubled as Douglas smashed home from Ivan Cavaleiro's low cross.

Ruben Neves celebrates as he opens the scoring for Wolves against .  January 2, 2018

At the opposite end of the table, Birmingham City climbed off the bottom above Sunderland thanks to a 2-0 win at Reading.

Jacques Maghoma broke the deadlock midway through the first half before Sam Gallagher made it two in the 64th minute as the Blues enjoyed back-to-back victories.

Tuesday's other game saw Fulham storm back from a goal down to thrash 10-man Ipswich Town 4-1 at Craven Cottage, Ryan Sessegnon and Aboubakar Kamara each netting a brace in a seven-minute blitz which started midway through the second period.

Ipswich had gone in front through Joe Garner on the stroke of half-time but were left to rue Jordan Spence's straight red card for a challenge on Kamara in the 54th minute.