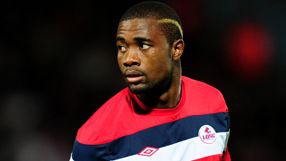 The Cameroon international was a transfer target for Liverpool last season before Serie A giants Juventus made an approach for the central defender's services in the summer.

Chedjou rejected a move abroad and instead signed a contract extension at Lille until 2015.

However, a clause inserted in his contract means he is free to discuss a move at the end of the current campaign, and Chedjou has admitted that he would prefer to leave France for England's Premier League.

Speaking exclusively to FourFourTwo.com, the 26-year-old said: "I would like to go - in England or maybe in Germany. I don’t really have preferences.

"But today, I would say I have a soft spot for England because it is a really fascinating championship. Moreover, I watched the Arsenal-Newcastle game and it really was the best of the best.

"I also went to London recently – Gervinho invited me. I saw the Arsenal-Manchester United match, when Arsenal lost. The football was beautiful.

"It's a football I would like to discover. I hope I will have the chance in my career to play some Premier League matches because for me, today, it is the best championship in the world.

"We hear about interests when it is the transfer period in December or June. It’s true there was interest from the clubs you mentioned [Liverpool and Juventus] but I don't stress about it. First, I will finish my season well," he added.

"Because Lille are third [in Ligue 1], we are probably less watched [than other teams] but I stay focused on the team.

"I have had contacts from other clubs but I don't think it is the right moment to talk about it. For the moment, I am really focused for Lille to be in the Champions League as it is the club's target.

"It is true that I have an agreement with Lille to go [when the 2011/12 season ends] but I take it easy. At the end of the season, I will see but it is always nice when your name is on the transfer lists of those big teams.

"I really want to concentrate on the end of the [Ligue 1] season. It would be ideal to leave the club where Lille want to be. The future, I will think about it a bit later."

Chedjou also admitted that he finds the prospect of playing for Manchester United and Manchester City attractive, but conceded that it is unlikely he will make a move to either club as they are well-stocked in central defence.

"They are two great clubs but right now, Manchester United already have what they need in central defence with [Nemanja] Vidic, [Jonny] Evans and Rio Ferdinand who are really strong players," he said.

"At Manchester City, they have [Vincent] Kompany and [Joleon] Lescott, who are players I really respect.

"If I could get into one of those two teams, I'll be there to learn. They really are two amazing clubs and I would be really happy if they call me."