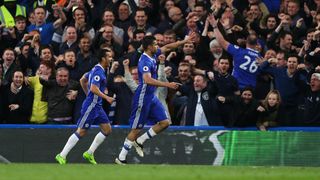 Chelsea recorded their 300th home win of the Premier League era as they beat Middlesbrough 3-0 on Monday to move a step closer to title glory.

Diego Costa gave the hosts the lead after 23 minutes at Stamford Bridge, recording his 20th league goal of the season.

Marcos Alonso soon doubled Chelsea's advantage and Nemanja Matic completed the scoring after the interval to wrap up a comprehensive victory, relegating Middlesbrough in the process.

Chelsea will now be crowned champions for the second time in three seasons if they win at West Brom on Friday after picking up a maximum three points for the 15th time at home this season.

Manchester United lead the way with 347 victories at home in the Premier League, while Arsenal are in second after beating United 2-0 on Sunday to move on to 306 home Premier League wins.