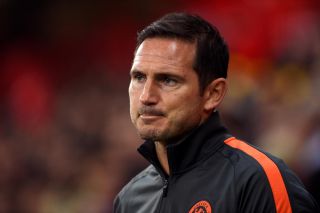 Chelsea and Frank Lampard are preparing for the unknown at Southampton in the Premier League on Sunday, but they could have a trick up their sleeve too.

The Blues started with a 3-4-2-1 system against Lille in the Champions League on Wednesday and recorded an impressive 2-1 win.

It was a shift from the 4-3-3 formation they had largely used in the opening two months of the campaign and Lampard is pleased to have that option.

“What I want us to be is adaptable and there are reasons I felt in Lille it was the right system to start with,” he said.

“There were reasons within the game why I thought we should go back to a four, so I think that’s hopefully going to be a strength of ours.

“I don’t want to change for change sake. I want us to have our way, but our way doesn’t mean 4-3-3, 4-4-2, 3-4-3. It can be adapting as a strength of ours hopefully, so that was just a choice I made in terms of that game itself, and obviously it may happen again.”

When it comes to Southampton, Lampard admitted it is difficult to predict how Saints boss Ralph Hasenhuttl will line up.

Lampard added: “It will be a tough match against a team with a very good manager. They are a very well organised team who play in different formations so it is hard to predict how they might come at you.

“But they come at you with a lot of pace with how they come at you off the ball. They have quality players. It is always a difficult place to go, especially when you are not at it, you have to be in tip-top shape to go there.

“There’s a lot of energy in their team and the crowd can get behind them if they play with that kind of intensity which they have. We need to match it, at least, because we want to keep our momentum going.”

Chelsea have earned plenty of plaudits lately, winning their last three games with Lampard up for Premier League Manager of the Month for September.

In addition to this, several Blues players were included in Gareth Southgate’s England squad on Thursday, but the former international midfielder is confident the likes of Fikayo Tomori, Mason Mount and Tammy Abraham will stay grounded.

Asked how his father – former West Ham defender Frank Lampard Senior – kept him in check, Lampard responded: “I’m sure you can imagine.

“It was all about being on top of any sort of sloppy moments I had, being on top of my game, being quite critical and I don’t think that’s a bad thing. It made me harsh on myself which I think was a good thing.

“My dad’s mantra of only hard work and training and daily application is going to get you where you want to be, I took on board in my career.

“I want to pass that on to these lads. It’s important with the families – and I’m not just talking about our three players now – because they are young boys as well as young football players and young men.

“When they do leave here we lose them slightly, they go home and that’s when you need good people around you.”