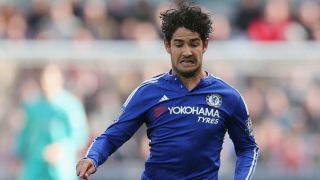 Alexandre Pato could still sign for Chelsea on a permanent deal, according to his agent Gilmar Veloz.

Pato joined Chelsea on loan from Corinthians with an option to buy in January but made just two Premier League appearances under Guus Hiddink, scoring once from the penalty spot.

With his spell at Stamford Bridge set to expire at the end of June the striker has been linked to a number of Brazilian sides, including two of his former teams in Internacional and Sao Paulo.

Corinthians president Roberto de Andrade has suggested Pato could return to the club and see out the remainder of his contract, which is due to expire in December.

However, Veloz still believes Chelsea could still exercise their option to retain the former Brazil international.

"Pato has already [reportedly] signed with Inter, Sao Paulo, Palmeiras, Flamengo – how is he going to sign when he has a contract with Chelsea until June 30?" he told Globo Esporte.

"He has a document there ready for a four-year contract if Chelsea wished to exercise it.

"I do not know if they are going to, I am not Roman Abramovich.

"If they decide not to buy him, it will be up to Corinthians to decide what to do.

"Pato is on holiday waiting on his future."