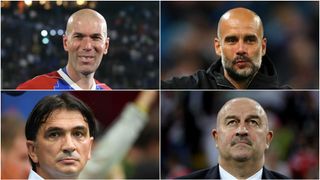 Stanislav Cherchesov and Gareth Southgate are among a number of World Cup bosses to be included on the shortlist for the Best FIFA Men's Coach prize for 2018.

Russia coach Cherchesov is a surprise inclusion after leading the tournament hosts to the quarter-finals, with Roberto Martinez and Southgate rewarded for reaching the last four with Belgium and England.

Didier Deschamps is included on an 11-man shortlist after leading France to glory with a 4-2 final victory against Croatia, whose coach Zlatko Dalic is also nominated.

Club representatives are led by Pep Guardiola, whose second season at Manchester City yielded the EFL Cup and a Premier League title won by 19 points.

Liverpool manager Jurgen Klopp is on the list despite finishing fourth in the Premier League, with his side's thrilling run to the Champions League final rewarded.

Zinedine Zidane won the award last year and he is nominated again after a third consecutive Champions League crown with Real Madrid. The former France star is the only unemployed coach on the shortlist following his shock resignation in May.

Ernesto Valverde won the LaLiga and Copa del Rey double in his first season at Barcelona and is included along with Diego Simeone, who led Atletico Madrid to the Europa League title and second in Spain's top flight.

Arsenal's new coach Unai Emery is omitted despite leading Paris Saint-Germain to four domestic trophies out of four, with no room either for Maurizio Sarri or Jose Mourinho.

The shortlist was picked by a panel of experts that includes former AC Milan and England boss Fabio Capello, as well as leading ex-players such as Frank Lampard, Didier Drogba, Kaka and Ronaldo.

The award will be presented at a ceremony in London on September 24, with supporters able to vote for their favourites. Selected journalists and national team coaches and captains will also have their say on who is the winner.