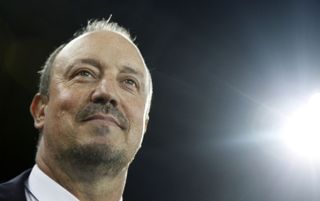 Chiellini is expected to miss the clash at Juventus Stadium through injury, but Benitez expects Antonio Conte to replace the Italy international with ease.

The sides go into the game tied on 28 points, three behind Serie A leaders Roma and the Spaniard is confident of snatching a positive result.

He said: "Juve have the strongest squad in the league, the absence of Chiellini doesn't change the balance.

"They have such strength in depth and Antonio Conte knows it, so they are the favourites for the Scudetto.

"Having said that, we must play in a relaxed and confident manner, as we have faith in our own qualities.

"I expect a strong performance tomorrow, as I want to see the minds and the hearts of my players.

"Juventus are very strong, which is why we need stamina and intensity as well as the desire to do well. We will try to stop them any way they can and hurt the Bianconeri."

Napoli bolstered their ranks in the week with the signing of free agent Anthony Reveillere, with the Frenchman set to provide cover for the injured Juan Zuniga and Giandomenico Mesto.

"We had a meeting and among the players available at the moment was Reveillere," he explained. "I knew the player and gave the all-clear to continue talks.

"He can give us a great deal and we have 15 days to get him back in shape. He has quality and can play on either flank."