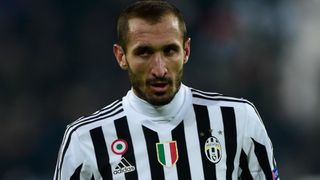 There are no favourites for this season's Scudetto, according to Juventus defender Giorgio Chiellini.

Juve closed the gap on league leaders Inter with a 2-1 win away to Sampdoria on Sunday thanks to goals from Paul Pogba and Sami Khedira.

The reigning Serie A holders are on a run of nine successive wins in the league and are just two points behind Inter.

However, Chiellini insists there are no favourites as Juve seek a fourth-straight Scudetto.

"There have been some difficult situations this season," he told Tuttosport after the game. "For the first two months the older players did not have the right attitude.

"There was negativity within the group, but slowly the air is changing and now you can sense a different atmosphere. We eventually got back on track and have now won all these games.

"There are no favourites [for the Scudetto]. We have not done anything yet but the confidence is growing and again we were solid.

"The attitude of the players who go out on the pitch is always good."

Juventus host Udinese on Sunday and have the chance to move atop the Serie A table if Inter slip up against Atalanta.