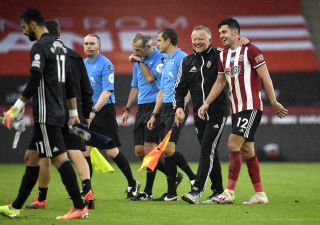 Chris Wilder insists Sheffield United are not talking about Europe despite enhancing their claims with victory against Wolves.

The three points moved Wilder’s men above Arsenal into seventh place and just a point behind their opponents in the Premier League table, keeping their dreams of Europa League football next season alive and kicking.

Asked if a place in Europe was now within their reach, the Blades boss replied: “We’ve never felt anything is on our grasp, or in our reach, we shouldn’t be anywhere near the position we are in.

“But we are where we are because we get our heads down and take defeat on the chin and come roaring back.

“People should be focusing about us not being in the bottom three, but you can’t affect what other people talk about. We just get our heads down and do what we need to do and affect what we can affect.

“Seven points out of nine is a really good return and we have to go again. We don’t have the strength and power some other clubs in this division have got but we have plenty of heart and plenty of bottle.”

Wilder was pleased with the desire and perseverance of his side, who put Wolves under pressure for large periods in the match before finally getting their reward in the third minute of stoppage time.

“I’m really pleased. We wrapped up some really big players at the top end of the pitch, and we had something going the other way as well,” said Wilder.

“The desire when there were tired bodies was really pleasing and to get a winner is just rewards for the players. We edged a really tight game through absolute will to go and win.

“This is top-10 Premier League football, nothing is handed to you. You have to go and earn it and we did that tonight.”

It is the fourth time this season the 24-year-old has had the injury and Nuno admits the problem is playing on Traore’s mind.

Traore came off with 11 minutes remaining and after the match Nuno said: “It’s the same issue that he had before. Let’s see how he can overcome that. He is now in pain, but he’s a strong boy.

“The moment that he has his shoulder dislocated, of course it is in his mind. What I saw is after that he keeps on going, fighting, jumping. It is in his mind but he is able to overcome that.”

It remains to be seen if Traore will be fit for Wolves next game against Everton on Sunday.

On the late defeat to the Blades, Nuno said: “It is a tough moment, the end of the game. It was a very good game by both teams, very intense, and it could have gone both ways. Both teams were going for it.

“Football is always teaching you that you should be focused until the last moment. It is small margins.

“We look game by game and now we have to react. It has been a tough period but we play again on Sunday and we must raise our standards.”