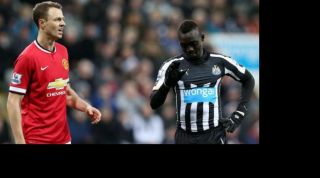 The incident happened in the first half of the clash at St James' Park, with Cisse initially appearing to aim a kick at the Northern Irishman.

Evans responded by seeming to spit in the striker's direction, which incensed Cisse and prompted a similar act in retaliation.

The Senegalese apologised for his part in the matter on Thursday, while Evans has maintained his innocence.

Newcastle's managing director Lee Charnley said in a statement: "Both ourselves and Papiss agree that this kind of behaviour is not acceptable.

"In life, when you do something wrong you have to front up, admit your mistakes and accept the punishment.

"Papiss was proactive this morning in making a full and heartfelt apology, which he did in advance of any notification from the FA regarding this charge.

"This was something he felt strongly about and we fully support him in quickly accepting the charge.

"Papiss is known to many of our region's schools, community groups and junior football teams for his involvement in the work of the Newcastle United Foundation.

"He has this evening expressed to us his strong desire to engage in additional community activities during the period of his ban.

"He is particularly keen to use his position as a role model to encourage young and influential fans to engage in sport and learn lessons about the importance of fair play and personal conduct."

Evans, whose side won the match 1-0, has until 1800 GMT on Friday to respond to the charge.