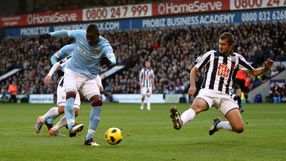 The feeling persists that City are underdogs, yet things could hardly be more in their favour.

They ended a run of three successive defeats in all competitions with a 2-0 win at West Bromwich Albion on Sunday as Italian striker Mario Balotelli began to pay back some of his reported 24 million pounds transfer fee with both goals.

The victory took City to within five points of leaders Chelsea, beaten 2-0 at Liverpool, and within three of United, who needed a stoppage-time goal from Park Ji-sung to scramble a 2-1 home win over Wolverhampton Wanderers on Saturday.

Sir Alex Ferguson's selection was affected by a virus that struck down many players, ruling out Dimitar Berbatov and leaving others such as Nemanja Vidic, Patrice Evra and Paul Scholes weakened but able to play.

It is not clear whether everyone will be fully recovered by Wednesday and with Wayne Rooney still absent with his ankle injury and Nani and Ryan Giggs struggling to make the game it is as good a time as any for City to take on their biggest enemy.

"It was really important we beat West Brom because it's very difficult for a team with aspirations of challenging at the top to lose three games in a row," City defender Kolo Toure told the club's website.

"The win has made us very happy and put us in the perfect frame of mind ahead of Wednesday's derby. It's a massive game for us and it will be really hard because they are a very strong team but we will go out to win the match and enjoy it."

City have lost their last four league games home and away to United and their cross-town rivals remain the benchmark. City's Arab owners will be watching closely and had better make sure they do not leave early to beat the traffic at the heliport.

Their last meeting at the City of Manchester Stadium was settled by a solitary Paul Scholes goal seconds from the final whistle while Michael Owen struck after six minutes of injury time to secure United's remarkable 4-3 Old Trafford victory earlier last season.

Leaders Chelsea are also in derby action just across west London at Fulham where they will hope to rediscover their verve after being outplayed at Anfield.

Didier Drogba, who came on for the second half on Sunday after suffering from a fever, should be fit to start at Craven Cottage, as should Michael Essien, who, in the continued absence of Frank Lampard, has been sorely missed in the last two games because of a toe injury.

Liverpool will hope to continue their surge up the table by recording a fourth successive win, away to Wigan Athletic, while Arsenal, beaten at home by Newcastle United on Sunday, visit Wolverhampton Wanderers.