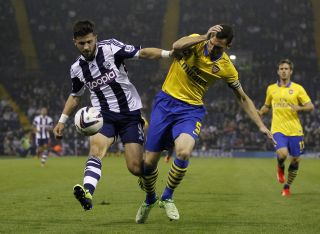 Republic of Ireland international Long has fallen out of favour this season, starting just four matches in all competitions, while he has failed to score in any of his six appearances.

Long, who saw a £6million move to Hull City collapse on transfer deadline day, admitted on Tuesday that he may be forced to go elsewhere.

"I don't want to go anywhere but time is running out on my contract and if an opportunity comes along that is right for me and my family, I will have to take a look at it," Long told the Wolverhampton Express and Star.

But Clarke insists that Long is a key member of his squad and believes his contract negotiations will eventually be finalised.

Long has eight months remaining on his current West Brom deal, although the club have the option to extend that by a further year.

"Shane's people came in with a price they wanted, the club have a price that they want and if Shane says there's no negotiation, then that's the case.

"I've read what he's said and it made a lot of sense. He seems happy enough here and after an injury-interrupted season, he needs a settled spell without injury, working in training all the time.

"And he needs to get out on the pitch and start producing the form he showed last season when he was a big player for the club.

"I'm convinced he will be a big player for the club in the future."