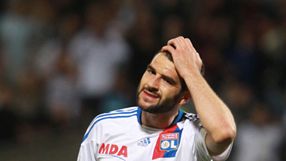 "It's a pity but we must continue to work hard," defender Milan Bisevac told TV channel BeIN Sport.

"We need to be able to change the rhythm during the game, and to be more efficient in front of goal."

Remi Garde's side dominated throughout but lacked efficiency as they wasted several chances in a one-sided second half while Evian Thonon Gaillard, who are 16th on 20 points, defended sturdily.

Evian, who have five players in South Africa for the African Nations Cup, were outplayed in the midfield but the visitors kept their composure.

Lyon enjoyed possession but failed to create danger until the 31st minute when Stephan Andersen parried Yoann Gourcuff's fierce shot from the edge of the box.

Michel Bastos's low shot was then blocked by Andersen six minutes from the interval as the home side proved too shy in the box.

Lyon upped the tempo after the break but it was still not enough.

Fifteen minutes from time, Lisandro collected a defence-splitting pass from Michel Bastos but Andersen dived into his feet before he could shoot.

Ten minutes later, he looked set to head home from an Anthony Reveillere cross, only for Iheb Mbarki to beat him to the ball, heading away before smashing his head on to the post shortly after landing.

Mbarki had his bloodied head wrapped but finished the game.