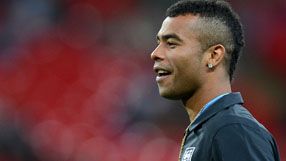 Cole returns after missing England's last game, a 4-2 defeat by Sweden in November, through injury.

Manchester United defender Chris Smalling is also back in the squad for the first time in almost a year and Everton midfielder Leon Osman, a surprise inclusion for Sweden, retains his place.

England play Brazil at Wembley on Wednesday ahead of World Cup qualifiers against San Marino and Montenegro in March.