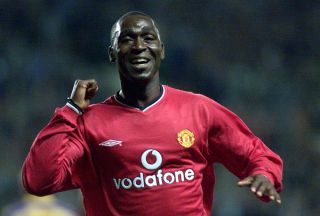 Andrew Cole has told Manchester United they must play with no fear when they face Barcelona in the Champions League quarter-finals.

Cole scored a memorable goal for United against the Catalan giants on the way to European glory 20 years ago, combining with Dwight Yorke in a sweeping move that cut the Barca defence wide open.

United twice drew 3-3 with the LaLiga side in the group stages of that year’s Champions League, and Cole drew on those memories when asked how United should approach the tie, with the home leg up first at Old Trafford next week.

“But we showed no fear there. A lot of teams go there and show a bit of fear. They had fantastic players but so did we.

“We went out there and played football. They did the same. That season both games ended up 3-3 and that told you everything about both teams.

“We were respectful but we both tried to beat each other. But six goals in each game speaks volumes about two teams trying to play attacking, attractive football.”

Bayern Munich and United progressed from the group ahead of Barca, with the top two sides meeting again in Barcelona for the final.

It was there new United manager Ole Gunnar Solskjaer scored the stoppage-time winner which wrote his name into club folklore as they won the treble in stunning fashion.

Solskjaer had replaced Cole in the 83rd minute but the latter insisted he had never been jealous of his old team-mate’s defining moment.

“I’ve been asked this a few times, ‘Were you disappointed Ole scored?’ he said.

United are second-favourites against Barca on this occasion but that does not worry Cole, who pointed out they beat Paris St Germain against the odds in the previous round.

“I called it beforehand,” he said of drawing Barca out of the hat. “I said to one of the lads, ‘We’re going to get Barcelona’. It’s a strange thing, it’s fate, it’s 20 years on, and then we get Barcelona. I knew it would happen.

“Anything is possible in football matches. United have proven that against PSG and, yes, they are going to have to play extremely well because they have an impish little genius in (Lionel) Messi.

“I have watched him closely over many years and I look at him now and think he is getting better as he gets older. If he has an off night or he is injured or whatever, then you never know what can happen.”