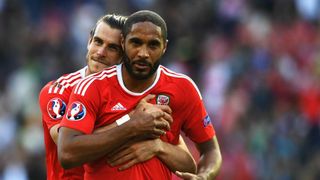 Wales have surprised many by booking their spot in the Euro 2016 quarter-finals, where they will face Belgium on Friday, but Coleman has paid tribute to Williams for his role in leading a strong-willed squad to such lofty heights in France.

Wales topped their group, which included England and Russia, before knocking out Northern Ireland in the round of 16.

"Maybe I'm old-fashioned, but you need leaders in your side. When you have a strong dressing-room, as we do, you need a strong captain and Ash is that man," Coleman said.

"Everyone looks at this campaign when it's been successful, but it wasn't always like that [Wales were nine minutes from drawing 1-1 with tiny Andorra in the first qualifier]."

Coleman controversially handed Williams - who captains Swansea City in the Premier League - the armband after stripping Aaron Ramsey of the captaincy following a 6-1 mauling at the hands of Serbia just four games into his reign.

"We had some tough times, dark days and huge disappointments, and that's when you judge people," he said.

"Not on a sunshiney day, but when you're not going so well, that’s when you find out about people around you. This man [Williams] has never ever disappointed me on or off the pitch.

"To be captain of this team is a big honour for him, he's worn the armband with pride and passion. We tried to take him off the pitch against Northern Ireland but he wasn't having any of it.

"There are leaders throughout the team, they all have something to add. But I'm old-fashioned. I believe the captain is important, how he leads the group is extremely important."