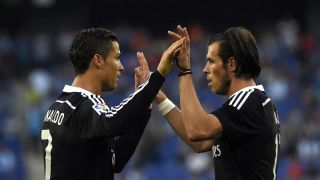 Wales manager Chris Coleman believes Cristiano Ronaldo and Gareth Bale's unquenchable desire to improve is responsible for their positions at the pinnacle of world football and he anticipates a fascinating showdown between the Real Madrid team-mates in Wednesday's Euro 2016 semi-final against Portugal.

Much of the pre-match focus ahead of the Stade de Lyon showdown has focused upon the Galacticos on either side, with Ronaldo driving on towards elusive international honours in his 33rd match at a major tournament as Bale and Wales continue to dream in their first outing at this level since the 1958 World Cup.

Coleman came up against Ronaldo during his Manchester United days when he was manager of Fulham and believes the 31-year-old's awesome qualities were fully in evidence then, while he sees much of the same in the Portuguese's club-mate Bale.

"If I speak to Giggsy [Ryan Giggs] or if you hear Alex [Ferguson] speaking about him, it's about his desire to get better. You see that on the pitch," he said.

"You see how motivated he is for himself to score, and to win. You can see that a mile off.

"Ever since he was younger at United he had that desire to train harder than anybody, get better, win as much as he could. Alex said he was one of the best he's ever worked with.

"We've said to our players, talent is a huge distraction to people. I constantly have conversations with players about people who played up to a certain level and were brilliantly talented. But if you look a bit deeper he was missing something: attitude, mentality.

"With all his talent, Cristiano has that mentality. It's the same with our boy, Baleo. He has that natural talent but he wants to get better and live his life right."

Coleman added: "I remember Ronaldo when I was at Fulham as a manager, and he scored in the last minute, beat us 2-1 when we were fine and comfortable. He went on a mazy run - unstoppable.

"You remember things like that, great pieces of play from great individuals. They've got one of them. We've got one too. It'll be interesting tomorrow."

Bale's enthusiasm to fulfil his duties as a team-mate and steer clear of any of the less-desirable superstar tendencies have won him numerous plaudits during Wales' surprise run to the semi-finals.

Coleman believe this is simply a mark of the man and his team-mates.

"You can't manufacture or pretend; you're either a team player or you're not," he explained.

"You're either comfortable or not being in a team environment and happy to work to a certain type of ethic or be in a place with a certain bunch of people who enjoy being together, working hard and putting themselves out there.

"Baleo is exactly like that, like all the lads. But it's not just this tournament. We had a whole campaign to get through to get here where they were exactly the same.

"Where we find ourselves now, it hasn't happened overnight. The players, the bonds they have, that togetherness.

"It's easy to say we have great team spirit on a shiny day. It's real but it came from the darker days. Baleo is the same as the other players on that."