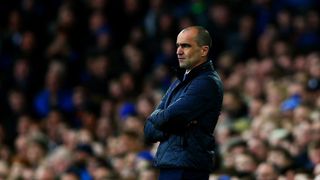 Coleman had a gilt-edged chance to salvage a draw with the last kick of the game, but somehow managed to put the ball over the bar from two yards with the goal gaping.

In his post-match media conference, former Swansea manager Martinez said: "A snapshot of the game, for me, was the chance that fell to Coleman for the last kick of the game.

"We were very slow in our performance, very pedestrian. The first and second halves were very contrasting.

"The reaction in the second half was us being ourselves and we created enough chances to win the game, never mind to draw it, but the lack of intensity and enjoyment in the first half - the fearful aspect of our performance - was a real shame.

"We had a terrific performance at Stamford Bridge at the weekend, even though we all know what happened at the end.

"We were looking forward to coming home. We need to make sure we are a team who can enjoy playing at home and produce the type of performance we did in the second half. If we do that, I’m sure all the little aspects will come in our favour."

Everton lost Muhamed Besic and Kevin Mirallas to injury in the first half and Martinez felt making two forced substitutions hurt his side.

"Two aspects affected our momentum - the injuries to Muhamed and Kevin - but I don't think we got any luck," he added.

"The clearest decision was the handball by Ashley Williams in the build-up to their second goal, but it wasn't down to that."