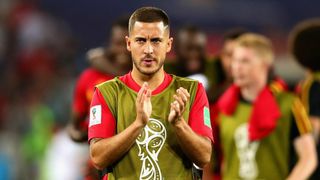 Eden Hazard backed his decision to call out Romelu Lukaku for "hiding" in Belgium's World Cup opener against Panama, saying it helped bring the best out of the striker.

The Red Devils went in goalless at half-time against the Central American minnows, and team captain Hazard took Lukaku to one side to encourage the Manchester United target man to get more involved in the game.

Lukaku scored two of Belgium's three second-half goals that day and added two more in a 5-2 victory over Tunisia, with Hazard also netting a brace in that match.

The improved performances from Lukaku strengthened Hazard's growing reputation as an effective leader of Roberto Martinez's team, even though the Chelsea man is a somewhat reluctant motivator.

"I didn't want to say that I was well within my rights to confront him, because I'm not always right," Hazard told FIFA.com.

"But I think we saw a different Romelu in the second half with his two goals [against Panama].

"There are some players you can be a little more direct with and others you have to approach in a different way."

Hazard was joined on the field by his younger brother Thorgan for the final seven minutes of Belgium's third Group G game against England, helping to see out a 1-0 victory that secured a tie with Japan in the last 16.

Borussia Monchengladbach midfielder Thorgan admitted his brother had not found the role of captain an easy one to adapt to.

"He never really enjoys addressing the team on the pitch or in the changing room," said the 25-year-old.

"His feet are still his favourite way of expressing himself, though his new role means he has to have an even closer relationship with the team."