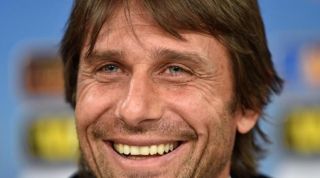 The 45-year-old led Juventus to three successive Serie A titles before surprisingly resigning from his post last month.

He was confirmed as Cesare Prandelli's replacement last Thursday, signing a contract that will keep him in charge of Italy until July 2016.

And, after Prandelli oversaw Italy's group-stage elimination at the 2014 World Cup in Brazil, Conte wants to restore the reputation of the four-time world champions.

"I am thrilled," he said. "Everyone would like to be in my position and represent Italy.

"I was anticipating a top club. The national team is a top club. Every coach would like to be here.

"I enjoy difficult challenges. My arrival has come at a tough time but I'm convinced that we can rise again.

"A team like Italy, four times World Cup winners with four stars, have to get back where they belong."

Andrea Pirlo has been a mainstay in the Italian national set-up for more than a decade and had initially planned to retire after this year's World Cup.

However, the veteran has since hinted he could continue playing internationally, and Conte is keen to talk to the Juventus midfielder.

"He is a champion and for me a great point of reference," he added. "He is among those who are in contention, but it is inevitable that, given his statements after the World Cup, that we must talk to him to understand what he feels and also he must hear what I have to say."

Conte's first match in charge will be a friendly against the Netherlands on September 3, before qualifying for Euro 2016 begins in Norway six days later.

"We're already analysing the Norwegian team," he revealed. "But before that, let's focus on the friendly against Holland."