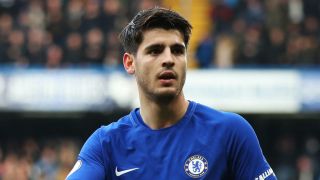 Morata, a July arrival from Real Madrid, has faced criticism of his performances on occasions this season, despite a return of 10 goals from 19 appearances in his maiden Premier League campaign.

Opportunities have once again been limited for Batshuayi, meanwhile. He has made just two league starts this term after being named in the first XI only once in 2016-17.

With no other out-and-out strikers available to him, Conte has occasionally utilised Eden Hazard as a centre-forward this season, even though the Belgian is more suited to a deeper role.

Nevertheless, Chelsea's manager gave Morata and Batshuayi his backing on Friday, insisting the club is prepared to be patient with both men.

Having claimed that Batshuayi provides Morata with sufficient competition, Conte added: "Don't forget you are talking about two young players, and for Morata this is the first full season [in the Premier League] for him and he is learning a lot from this experience, learning to deal with these types of situations.

"And if we speak about Batshuayi we are at the same level. He has only one season he played regularly for Marseille. We are talking about young players.

"Me and the club know very well this situation and for this reason we must have patience to understand there is a process and we are ready to face this process."

Conte had earlier spoken of his "great admiration" for Sanchez, who has only six months remaining on his Arsenal contract and has been strongly linked with a move to one of the two Manchester clubs.

Yet the Italian struggled to provide clarity when asked whether he could understand Chelsea fans being confused by an apparent lack of interest from their club in the Chile forward.

"I can give my opinion to my club for every situation, then they have to make the best decision and that is right," he said.