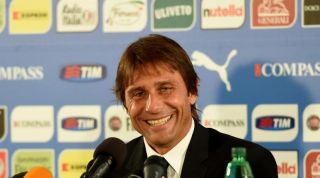 Ciro Immobile's third-minute goal set Italy on their way in Bari and Netherlands defender Bruno Martins Indi was then sent off, conceding a penalty in the process.

Daniele De Rossi converted the spot-kick in the 10th minute and Italy – who could have scored several more goals in Conte's first match in charge – never looked back.

Forwards Immobile and debutant Simone Zaza linked superbly in attack in the absence of the suspended Mario Balotelli and Conte was full of praise for the pair, goalscorer De Rossi and young midfielder Marco Verratti.

Conte said afterwards: "Beyond the result, I was interested in the response of the players, it was definitely positive.

"These players want to do something important. The path is still long, but these are games that give confidence.

"We worked on the relationship between the strikers [before the game]. De Rossi [also] had a great match [and] Verratti is our present and our future."

Despite the result and impressive performance, Conte was quick to urge caution ahead of his side's first Euro 2016 qualifier in Norway on Tuesday.

"We have a mix of young and experienced players. We still have a long way to go," he added.

Conte replaced Cesare Prandelli in Italian football's top job after the latter resigned following their disappointing World Cup campaign, where they failed to get out of the group stages.