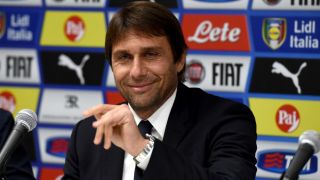 Chelsea have confirmed Antonio Conte's first match in charge will be a pre-season friendly against Rapid Vienna.

The fixture, which is set to take place at the newly constructed Allianz Stadion on July 16, will be followed four days later by a clash with Wolfsberger at the Worthersee Stadion in Klagenfurt.

Conte will take the reins at Stamford Bridge after leading Italy at Euro 2016 and begins his tenure by taking Chelsea to the same Velden base at which they prepared for their title-winning 2014-15 campaign under Jose Mourinho.

Following their stint in Austria, Chelsea face International Champions Cup fixtures against Liverpool, Real Madrid and AC Milan during a tour of the United States.

Conte was confirmed as Mourinho's permanent successor this month, with Guus Hiddink having led the club since the Portuguese's departure in December.