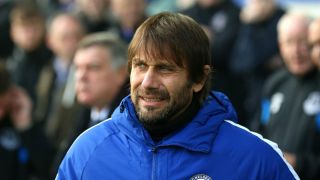 The champions travel to Arsenal on Wednesday, granting them an extra days two days' rest when compared to some of their Premier League counterparts following a 5-0 weekend romp against Stoke City.

Jose Mourinho has regularly bemoaned Manchester United's schedule over the festive period, while Pep Guardiola said quick turnarounds in games were a "disaster" for his Manchester City players and others.

Earlier this season, Conte questioned the Premier League's scheduling of games against City and Liverpool being on Saturdays after Wednesday night Champions League away matches at Atletico Madrid and Qarabag respectively.

He feels the present situation is untenable and called for the authorities to heed the concerns of top-flight managers.

"I think that we can do better," he said. "[When I say] we, I speak about all the movement. It's important we don't close our eyes because this is a problem.

"When there is a problem you have to face it and try and solve it with honesty, to give the same chances for all the clubs.

"Not only for Chelsea or for Arsenal and Manchester City – all the teams.

"Someone has to think and not close their eyes and continue this way because I think that this way is not right.

"The problem is always the same. Every coach has complained about the fixtures, that there is not the right rest for the players and the players risk a lot of injuries this way.

"We must be very positive together to try to find the right solution."

Another current topic where Conte aligned himself with Guardiola was the issue of serious foul play.

City midfielder Kevin De Bruyne avoided serious injury after being on the end of a heavy tackle from Crystal Palace's Jason Puncheon during Sunday's 0-0 draw at Selhurst Park, having also come in for robust treatment from Tottenham's Dele Alli earlier this month.

Guardiola praised the physicality of the Premier League but urged referees to be wary of a line being crossed and Conte echoed the Catalan's sentiment.

"The league is very strong in the physical aspect and you can see that with the players," he said.

"This type of football is exciting because to see two players fighting for every ball is good.

"But the referee must pay great attention if there is bad intention in the tackle, when there is bad contact and the will to give a bad kick or to try to break the leg.

"In this instance, I think they have to punish the player with the red card and ban him for many games. This must be very clear."