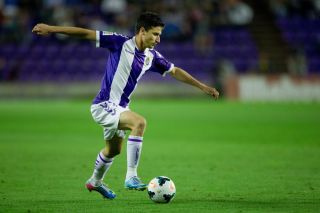 The second round of the 111th edition of the tournament sees teams from the Spanish second tier enter the competition.

Betis, who finished bottom of La Liga last season, welcome Llagostera to the Estadio Benito Villamarin on Wednesday on the back of a shock 4-1 loss to Ponferradina last Sunday.

Head coach Velazquez is keen to eradicate memories of that performance by bouncing back in the cup.

"We had a lack of attitude and organisation," he told the club's official website after the match. "We will learn from defeat, the way that the match has been lost and think ahead to the game we have on Wednesday."

Betis' fellow relegated side Real Valladolid face a tough clash against another Segunda Division outfit in the shape of Sporting Gijon.

Midfielder Omar Ramos admits securing promotion remains the team's immediate aim but is hopeful of a long run in the cup.

"We face the tie with the same enthusiasm as we do in the league, for us is it's a very important game," he told Valladolid's official site. "The fundamental thing is the league and to get promotion, of course, but we will try to go to the next round."

Osasuna also slipped out of the top flight last term and face a potentially tricky away tie at Deportivo Alaves, while Alcorcon - who made the round of 16 last term - hit the road to face Lugo.

There are all second-tier contests involving Girona and Tenerife, Albacete and Real Zaragoza, and Recreativo Huelva and Ponferradina.

Gimnastic de Tarragona suffered a narrow 1-0 aggregate defeat to La Liga giants Valencia in the last 32 last season and the Segunda B side will aim to continue their participation this time around by winning at Alcoyano.