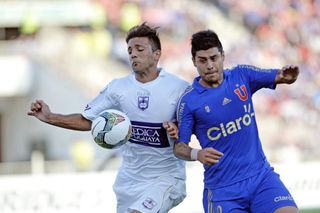 Cruzeiro lost their opening Copa Libertadores match 2-1 to Peru's Real Garcilaso and have yet to start the Brazil Serie A season, while Universidad are already eight rounds into their Chile Primera Division campaign.

Universidad have only lost once this year but head coach Cristian Romero will want his team to tighten up defensively ahead of their trip to Brazil, after watching them come from behind to draw 3-3 at Audax Italiano on Friday.

Having taken the lead in the third minute of their league encounter in Santiago de Chile, Universidad conceded three times before the hour-mark.

But goals to Patricio Rubio, who has scored in Universidad's past two matches, and Francisco Castro ensured Romero's men claimed a point and extended their unbeaten run to three games.

Rubio's goal against Audax Italiano was a fine piece of centre forward work, as he found a pocket of space on the edge of the area, turned his marker to receive the ball facing the goal and burst forward, before chipping the opposition goalkeeper from a tight angle.

If Universidad defeat Cruzeiro on Tuesday, they will move to six points after a 1-0 win over Defensor Sporting of Uruguay on the opening matchday.

Defensor and Garcilaso both have three points after the former defeated the latter 4-1 last week.

While the Brazil Serie A has not resumed this season, Cruzeiro have played since their loss to Garcilaso in the Minas Gerais state championship, drawing 0-0 with reigning Copa Libertadores champions Atletico Mineiro before wins over Guarani MG and Boa.

In Group 7, Emelec will also have a lot to play for as they travel to Brazil on Wednesday with a win at the Maracana against Flamengo set to take the Ecuadorian club to the top of the standings.

Emelec (three points) sit second in Group 7, one point behind Mexico's Leon (four), who drew 1-1 with Bolivar (one) last week.

Flamengo (zero) lost 2-1 at Leon on matchday one, while Emelec defeated Bolivar 2-1.

The Ecuadorian champions won their local derby against Barcelona 2-1 on Saturday and have not lost in 19 competitive fixtures, while Flamengo have won three in a row in the Rio de Janeiro state championship since their loss in Mexico.

Four other Brazilian clubs will also be in action this week with Group 1 leaders Atletico Paranaense to travel to Velez Sarsfield of Argentina, Gremio will host Colombia's Atletico Nacional in Group 6, Group 2's top team Botafogo will head to Chile to play Union Espanola and Mineiro also face Colombian opposition in Group 4 in the shape of Santa Fe.

Argentina's San Lorenzo and Newell's Old Boys will complete the week's Copa Libertadores action on Thursday with games against Independiente del Valle of Ecuador and Uruguay's Nacional, while in other matches, Arsenal take on Deportivo Anzoategui on Tuesday and Cerro Porteno will host Lanus on Wednesday.