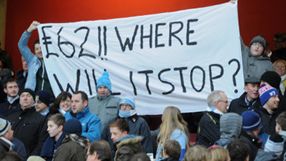 Research conducted by FourFourTwo into the cheapest available away tickets for each fixture shows that over the 2012/13 Premier League season, fans of Manchester United, Liverpool, Manchester City, Tottenham Hotspur, Chelsea and Arsenal will be forced to pay far more than supporters of the Premier League's other sides.

Followers of Manchester United will be charged a minimum of £840 for the 19 away games – more than £200 above the total required of Reading, Swansea City, Southampton and Norwich City fans.

The six 'big' clubs are generally considered to be worthy of 'Category A’ ticket pricing, meaning fans rarely get a cheap day out. There is a considerable drop-off after sixth-placed Arsenal (£819) to Everton (£732.50).

Manchester City returned 900 unsold tickets for this weekend's Premier League match at Arsenal to the North London club, with fans groups reasoning that the £62 they were being asked to pay was an unreasonable amount.

City Supporters' Group spokesman Kevin Parker said: "In 2009 a ticket to Arsenal was £32.50, so in under four years they have gone up by almost £30 and now they're the most expensive in English football. It seems a ridiculous amount of money. Some fans are saying, 'I'm not paying £62 whether I can afford it or not because I've got to draw a line somewhere'.”

GRAPHICHow much does it cost to watch each Premier League team away?

Manchester City fans are not the only ones facing a hefty bill – in fact, followers of Manchester United and Liverpool are being asked to fork out more across the season when travelling the country to support their side, albeit only just.

Fans of City are just £3 behind those of United over 19 matches, at £837 to the Red Devils' £830. Fans of Spurs, Chelsea and Arsenal would also face a bill of more than £800 if they wanted to attend all of their team's Premier League away fixtures – excluding the cost of travel.

By the end of the current campaign, travelling fans of Manchester United will have been forced to pay at least £216.50 more than fans of newly-promoted Reading to visit every other Premier League ground – this equates to over £11 more per match.

Naturally, these high prices are reflected in the away end, but although fans of ‘Catego