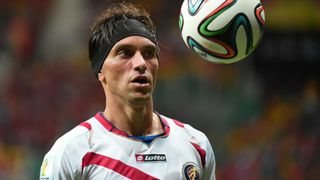 Costa Rica step up preparations for their first ever Copa America appearance when they host Venezuela in an international friendly on Friday.

The Central Americans were invited to compete in the special Centenario edition of the tournament, celebrating the competitions 100th anniversary, to be held in the United States, starting June 3.

Christian Bolanos is one name to keep an eye out ahead of the friendly in San Jose, with the Vancouver Whitecaps winger in red-hot form heading into the clash.

The 32-year-old has scored four goals in his first 11 games in MLS and will be looking to consolidate his spot in Oscar Ramirez's line-up for the Copa America, especially after missing out on the 2015 CONCACAF Gold Cup.

Costa Rica have been drawn in Group A for the Copa America and face Paraguay first up on June 4, before confronting hosts the USA on June 7 and then Colombia four days later.

Assistant coach Luis Marin already has his eyes firmly set on Paraguay, and the Costa Rica coach believes the Venezuela clash is perfect preparation heading into their Copa America opener.

"Thinking ahead to Paraguay, the friendly can really help us," he said. "Venezuela will come here to compete.

"As for our chances [at the Copa], we are very happy and the sensations are positive from the training sessions.

"We are working as much in defence as with the attack and we will have a team that really pressures."

Coach Rafael Dudamel remains optimistic over their chances, and hopes they can at least reach the final four of the competition like they did in 2011, before bowing out to runners-up Paraguay.

"Our objective is to equal or better what we did at the Copa America in 2011," the 43-year-old said.

"It is bold, but it's something we can achieve."