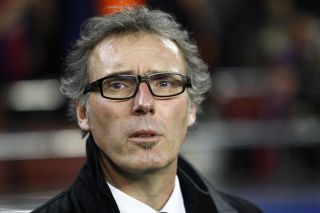 The Ligue 1 champions head to the Stade Francois Coty for a last-16 encounter on the back of a difficult week that has seen their air of invincibility slip significantly.

PSG's unbeaten start to the season came to an end with consecutive losses to Barcelona and Guingamp. The former, which cost PSG top spot in Group F of the UEFA Champions League, proved particularly damaging.

However, the immediate focus now shifts to a trip to Corsica for a meeting with Ligue 2 mid-table outfit Ajaccio - a game that will be expected to result in progression through to the quarter-finals of the Coupe de la Ligue.

But, after seeing his side kept at bay in the 1-0 loss at Guingamp, Blanc is keen for PSG to be more aggressive and take nothing for granted against their lower-league opposition.

"We were too generous towards Guingamp, I didn't like that," Blanc told the club's official site.

"There was a lack of aggressiveness in our play and we gave away a set-piece to concede the goal.

"We need to be more careful about the fact that nothing is guaranteed. We will be looking to improve and end the year on a more positive note."

Last season's triumph over Lyon in the tournament showpiece at the Stade de France marked the fourth time that PSG had lifted the Coupe de la Ligue, making them the most successful team in the competition's history.

Yet, while the visitors have considerable pedigree in the tournament, recent history suggests that they are unlikely to have it all their own way against Ajaccio, despite the hosts' disappointing form since relegation to the second tier.

Ajaccio finished bottom of Ligue 1 with a lowly 23 points in the previous campaign but have consistently proven to be a difficult side for PSG to crack.

Prior to their 2-1 win in Corsica back in January, PSG had been held to draws in each of their last three meetings with Ajaccio.

The depth of talent in the PSG squad should be enough to rule out any possibility of a surprise result this time around, although it seems likely that Blanc will shuffle his pack ahead of Saturday's Ligue 1 game with Montpellier.

Marco Verratti is suspended, meaning that there is sure to be at least one change in the midfield as PSG seek another cup run in a tournament that has been the source of great joy for the capital club.