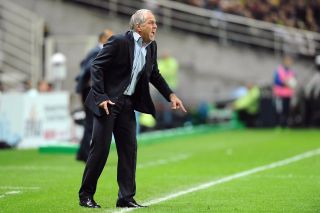 The second-tier club had forced the game to an extra 30 minutes with a resolute defensive display away from home, but snatched a spot in the fourth round as Haller slipped the ball under goalkeeper Steeve Elana in the 23rd minute of extra time to seal a 1-0 victory.

It is the first time Lille, who missed out on last year's final after losing on penalties to St Etienne in the last four, have failed to make it beyond the third round since the 2008-09 season.

In another upset of sorts, top-flight basement club Valenciennes saw their miserable season continue as they lost 3-1 at home to Ligue 2 Troyes.

Yoann Court and Ghislain Gimbert gave the visitors a 2-0 lead at the break, and any hope provided by a Mathieu Dossevi strike after the break was soon dampened by a second for Gimbert.

Alejandro Bedoya put the hosts ahead in the 73rd minute, before Georges-Kevin N'Koudou added a second at the death to make sure of a fourth-round berth.

Bastia came away with a 1-0 victory from an all-Ligue 1 clash with Ajaccio in the early kick-off at Stade-Armand Cesari - Ilan scoring the only goal of the encounter in the seventh minute.

Rennes and Toulouse both picked up victories over lower-league opposition, as the former overcame Nancy 2-1 after extra time and the latter cruised to a 3-1 away victory over Creteil.

Elsewhere, the last remaining third-tier club in the competition - Amiens - fell to a 3-1 defeat at the hands of Ligue 2 second-placed club Tours, who now join Auxerre as the only non-top-flight sides still in the tournament.

The third round continues on Wednesday as Guingamp take on Evian, Montpellier head to Sochaux and Reims welcome Monaco.