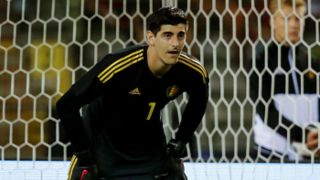 Belgium are not short of belief but Thibaut Courtois insisted the Red Devils are not among the favourites to win the World Cup in Russia.

Courtois and Belgium head into Monday's Group G opener against debutants Panama full of confidence as they boast the likes of Eden Hazard, Kevin De Bruyne and Romelu Lukaku.

Courtois, however, did not go as far during his pre-game news conference at Fisht Stadium in Sochi on Sunday.

"We have the quality. Players with talent," Courtois told reporters. "We know each other well. We're at peak form in life. We feel confident.

"To call us big favourites I wouldn't do. We are outsiders but we have a chance to go far. We believe in that chance. We aren't going to say we are going to win or [are the] best team, but we have belief."

Courtois, who dismissed questions about his future amid links with Real Madrid, added: "I think everybody has more experience if we compare the situation to four years ago [in Brazil]. We've experienced more in life and football. We know what to expect. I feel calm. We are ready."

Courtois and Martinez spoke to the media separately in Sochi today.Thibaut was asked about his future and but dismissed the question, while he played down ’s tag as a favourite.Martinez braced for test.June 17, 2018

If Belgium are to be successful in Russia, Courtois said unity and not individuals will be the key to unlocking the golden generation's potential after being asked about the importance of captain Eden Hazard.

"It's not only Eden at his best to win. I don't think I've seen him train as well [as] in the last few weeks," he responded. "But we need Romelu to score goals, Kevin how he is playing at [Manchester] City. Players with big quality.

"If you want to go far, you need best players at their best. I think everyone is training well."

Martinez fronted the media before Courtois and the Belgium boss refused to dismiss the challenge of newcomers Panama.

Panama will make their World Cup bow on Monday having upstaged the United States to make it to Russia, though the Central Americans face an uphill task against the Belgians.

But Martinez – buoyed by Vincent Kompany's fitness though the injured skipper will miss Monday's clash – said: "We respect Panama. One of the stories of the World Cup. [They are] why we enjoy the format of the World Cup, arriving against the odds. They're dangerous for any team facing them. They have incredible belief to achieve the dream.

"We want to play a big role on the pitch. We know it's going to be difficult. They're here on their own right. No one expected them to be here. To knock USA out of World Cup contention, you have something special. They're competitive and we have to match that. It's about what we do on the pitch."