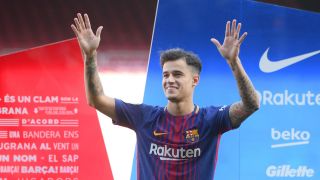 Philippe Coutinho has been named on the bench for Barcelona's Copa del Rey quarter-final second leg with Espanyol as he nears his debut for the Catalan giants.

The Brazil international joined Barca from Liverpool at the start of the month in a club-record deal potentially worth a reported €160million.

He was already suffering with a thigh problem upon signing, with Barca expecting him to miss three weeks of action.

But, having been named in the squad for the first time, the 25-year-old could make his Blaugrana bow from the bench against Espanyol, who visit Camp Nou with a 1-0 lead.

Fellow new signing Yerry Mina is also among the Barca substitutes for the first time following his switch from Palmeiras.