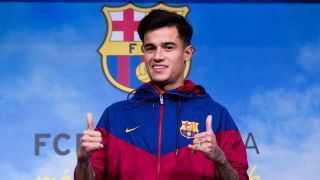 Philippe Coutinho is undergoing a medical in Barcelona ahead of the completion of his transfer to the LaLiga leaders from Liverpool.

The Brazil star arrived in Spain on Saturday after the clubs agreed a reported fee of €160million – a record purchase for Barca and the most expensive deal in history for a Premier League player.

Coutinho visited the Hospital of Barcelona early on Monday to complete the first part of his medical and is due to undergo final checks at Camp Nou later.

He will then meet some of his new team-mates before finally signing a five-and-a-half-year contract, alongside club president Josep Maria Bartomeu. He will then be officially presented to the media and fans.

The 25-year-old will pose with the Barca shirt but he has not yet been assigned a new squad number, according to the Catalan press.

It has been suggested he will take number 22 if Aleix Vidal moves to Sevilla on loan, as expected.

Coutinho could make his debut in Thursday's Copa del Rey clash with Celta Vigo at Camp Nou, if he recovers from a thigh injury.