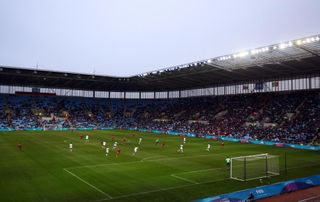 Coventry were forced to play their football at Sixfields in Northampton in 2013-14 after a disagreement with the Ricoh's owners Arena Coventry Ltd (ACL) over rent, a move that proved a source of much anger among the club's fans, some of whom stayed away from games in protest.

Various parties and supporters' groups expressed their concern at the plight of the club - who fell on hard times financially after spending 34 years in England's top flight from 1967-68 to 2000-01.

However, Coventry will play home games at the Ricoh for the next two years with an option for a further two, and could return as soon as September 5 when they host Gillingham.

Steve Waggott, development director at Coventry, praised the levels of compromise between the club and ACL - while also adding the need for patience from fans.

"We are delighted to get this deal done and I am sure every supporter of Coventry City will be thrilled with this news," he told the club's official website.

"We are under no illusion what a difficult 12 months it has been for the supporters and that was uppermost in our thinking as we worked to get this deal done.

"There has had to be compromise on both sides and the commercial details of the deal will remain confidential.

"Now it is all about looking forward to a really exciting season back in the community and with a real chance of success. I am sure every supporter will want to give Steven Pressley, his staff and players their full backing for the season at the Ricoh.

"Logistically, it’s going to mean a huge amount of work between now and the first game back and we would ask supporters to bear with us as all of our efforts up to now have been in getting this deal over the line to get us back to Coventry as soon as possible.

"We hope to be back at the Ricoh for the clash with Gillingham. We will keep supporters fully informed of progress to that aim."