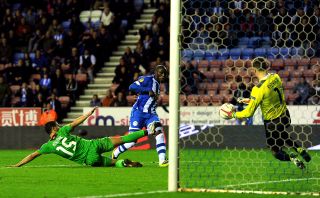 The Championship side bounced back from Alexander Prudnikov's 15th-minute opener as Manchester United loanee Nick Powell equalised just before half-time to preserve the hosts' unbeaten record in the competition.

The teenager also scored twice against Maribor and though Coyle was particularly thrilled with his performance, he was delighted with the whole team.

"We knew they were a quality side and they showed that," he told BT Sport . "All credit to the lads, they strictly stuck to their task and scored a great goal through Nick Powell.

"I think everything pleased me. I was certainly disappointed by the goal, but we looked a threat all night and the goalkeeper made a wondersave with the last kick off the ball from Marc Antoine-Fortune.

"We thought we were worthy of three points but we were delighted with the application.

"It puts us in a nice position and our destiny's in our own hands.

"That's what we want. If we go unbeaten over the last three games, it should be enough to qualify."

Wigan will continue their European campaign with a match against the same opponents in Kazan on November 7.