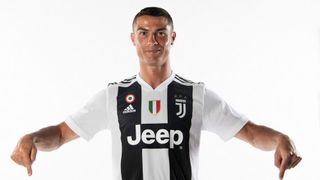 The former Manchester United superstar completed a €112million move from Real Madrid to the Serie A champions in June.

While it is believed to be less than his wages in Spain, Juve are reportedly paying Ronaldo €30million a year across a four-year contract, which is substantially more than the rest of their top players earn.

De Laurentiis believes such enormous fees represent a gamble on a player entering his 17th full season as a professional.

"Cristiano is getting on a bit now," De Laurentiis told La Verita, as quoted by AS.

"To maintain some kind of balance, it's very dangerous for a club to spend so much money on just one player – one who is reaching the end of his career.

"His salary is totally off the scale for Juve's means. I wonder whether it will be more of a commercial success or more of a sporting success.

"If you start paying crazy wages, sooner or later, it will start going against you."

De Laurentiis' assessment of the financial risks stems from his claim that Ronaldo was offered to Napoli prior to the Juve's involvement in discussions.

He says he met with the forward's agent, Jorge Mendes, before the costs spiralled out of the club's reach.

"[Mendes] told me that Ronaldo would make me rich, so I made him an offer: that the first €250m Cristiano brought in would be for Napoli and the next €100m would be for the player," De Laurentiis said.

"That way, CR7 would have paid for himself. Then Juve appeared and that was when the bidding started."