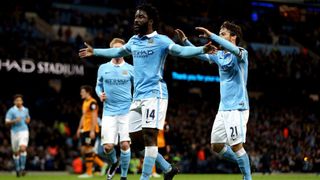 The Ivory Coast international left Swansea for Manchester last January but, despite scoring eight goals in 23 appearaances this term, he has struggled to find his best form amid regular fitness problems.

Nevertheless, Curtis believes the notion of the crowd favourite returning to south Wales is somewhat fanciful.

"Of course we would take Wilf back - he would be a fantastic addition," he said after watching his side suffer a shock 3-2 FA Cup defeat to League Two Oxford United.

"But he is playing regularly for Manchester City and I am not going to hold out any hopes for that one."

The sale of Jonjo Shelvey could potentially finance such a lavish transfer swoop and reports linking the England midfielder with a transfer away from the Liberty Stadium are likely to continue after he appeared to gesture angrily towards Swansea fans after the final whistle at the Kassam Stadium.

Curtis sought to play down the incident but stated that Shelvey's performance, much like those of his team-mates, was below par.

"I genuinely did not see it. I saw him go over to the fans and I thought everything was okay," he added.

"The suggestion is some of the crowd were having a go at him but, again, I genuinely did not see that.

"I heard the crowd sing his name a few times during the game, so I do not know what the reaction was.

"I did not see it and have not had a chance to speak to him as he has gone for a drugs test.

"His performance was a bit like the team's - he started poorly and got better.

"But we expect more from Jonjo, it is as simple as that.

"We know the ability he has got, and if he does not play at those standards everyone starts to point fingers. He is disappointed himself but that is something we have to work on."