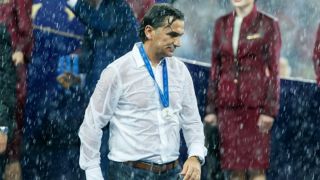 Zlatko Dalic said he could coach Brazil or Barcelona but Croatia will always remain his favourite job after the country's run to the World Cup final.

Croatia made history under head coach Dalic following their first World Cup final appearance in Russia, where they lost 4-2 to France in the decider.

Dalic and Croatia earned admirers for their football throughout the tournament, while the Balkan nation were greeted by an estimated half-a-million fans on the streets of Zagreb having returned home to a remarkable reception despite defeat.

Reflecting on Croatia's World Cup exploits, Dalic said in an emotional speech: "I can be coach of Brazil or Barcelona but this will always be the favorite job, to lead Croatian national team.

"There is still grief because we had to win the trophy. But if someone had offered me to be in the final before the World Cup, we'd all have taken it."

Dalic - who worked his way up the ranks in Asia where he led UAE giants Al Ain to the 2016 AFC Champions League final - replaced Ante Cacic in October as Croatia struggled during World Cup qualifying.

The 51-year-old oversaw a change in fortunes, guiding Croatia past Greece in the play-offs before the nation made their mark at Russia 2018.