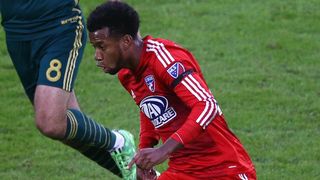 Dallas recorded a come-from-behind 2-1 win over Pachuca in the first leg of their CONCACAF Champions League semi-final.

The Mexican visitors had gone ahead early through Franco Jara at Toyota Stadium in Texas on Wednesday.

But goals either side of half-time from Maximiliano Urruti and Kellyn Acosta saw Dallas claim victory ahead of the return leg on April 4.

Pachuca, four-time champions, made the ideal start away from home.

Erick Aguirre beat his man down the left before cutting back for Jara, who struck off the post in the third minute.

But Dallas levelled a minute before the break, Urruti scoring after Pachuca goalkeeper Alfonso Blanco punched a cross into his path.

Acosta's 58th-minute winner was a stunner, the United States midfielder curling a 30-yard free-kick over the wall and past Blanco to give Dallas a first-leg advantage.