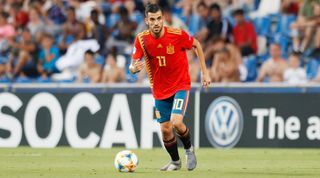 The Spain Under-21 international is closing in on a move to the Emirates as the final details are thrashed out, AS reports.

Ceballos will not travel with Zinedine Zidane’s squad to the USA for pre-season and will instead head to London to finalise a move to the Gunners.

There will be no option to buy included in the deal as the 22-year-old is expected to play a role with Real Madrid's first team in future.

The Merengues originally intended to sell the midfielder on a permanent deal this summer, but his outstanding performances to help Spain win the European Under-21 Championship in June changed the club’s position.

Ceballos wants to feature in 40 games next season after struggling for minutes in Madrid and Arsenal boss Unai Emery played a crucial role in convincing the player that the Emirates was his best option.