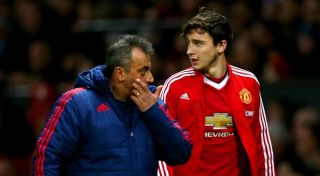 Manchester United manager Louis van Gaal may be forced into the transfer market after confirming Matteo Darmian had to be hospitalised following a heavy collision during his team's 1-0 loss to Southampton at Old Trafford.

Van Gaal confirmed that Darmian was taken straight to hospital after being replaced by Paddy McNair.

The United manager could not confirm the exact nature of the injury but said it looked serious.

"It is bad because he is now in hospital," the Dutchman said.

"He was spitting blood. It looks like his rib and his chest, but we have to wait and see as I cannot say. It was not a nice view for the players to see that.

"I can only say that is the fifth full back who has been injured so that is what I have to do every week - make solutions to sort the problem."

The Italian has had mixed fortunes at the club since arriving in July, having started his United career in fine form.

Since struggling against Arsenal in a 3-0 defeat, he has found games harder to come by and has been asked to play at left-back - as opposed to his preferred right-back berth - but was enjoying a consistent run in the side before this latest setback.