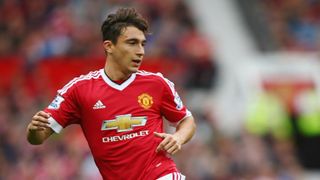 Matteo Darmian has laughed off suggestions that he is unhappy at Manchester United amid speculation linking him with Bayern Munich and Juventus.

The Italy international joined United from Torino ahead of the 2015-16 campaign and made a fine start to life at Old Trafford, but has been struggling to hit his best form in recent months.

A number of reports claimed that he is unhappy in England and is already pondering a transfer away from United.

However, Darmian has now moved to deny any such claims and is adamant he has no intention of leaving United any time soon.

"I am happy here with the team, the staff and the city," the 26-year-old was quoted as saying by Manchester Evening News.

"I am happy here so I just try to ignore the rumours. I want to continue on my way and that's it.

"I think the manager is happy with my progress and when I train I try to improve day by day. And when the manager gives me a chance, I try to do my best and to help the team."

Darmian has made 23 appearances in all competitions for United so far this term.

The full-back has a contract with the Manchester outfit until June 2019.