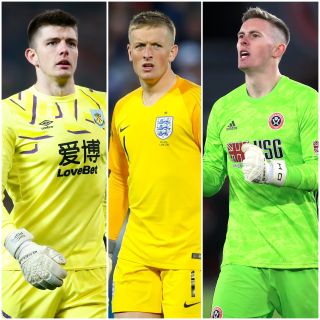 David James understands the constant pressure Jordan Pickford faces and believes there will be a “really good battle” to be England’s number one at next summer’s European Championship.

Given the starting job at the 2018 World Cup, the Everton goalkeeper rewarded Gareth Southgate’s faith by helping the Three Lions to a penalty shootout win against Colombia before a man-of-the-match display in the quarter-final against Sweden.

England reached the semi-finals in Russia, just as they would do with Pickford between the sticks in the following summer’s Nations League finals, but questions over the goalkeeper have increased over the last year.

The 26-year-old has struggled at times, leading to growing calls for both impressive Burnley goalkeeper Nick Pope and youngster Dean Henderson to be given a chance.

James, who earned 53 caps in goal for England up until 2010, knows what it is like to be under scrutiny with his country and believes Pickford would benefit from threats to his spot.

“When it comes to the England situation, I was always a fan of not having a strict number one,” the former goalkeeper told the PA news agency.

“Even though when I first got in the side with (Fabio) Capello, I was essentially the number one and every qualifier I was fit for I was being selected for. But at the same, the way that Capello picked the squad, I was never sure that I was going to be the number one so it kind of kept me, I’d like to think, on my toes.

“I look at Pickford and there’s tremendous qualities he’s got. I think being the number one is very, very difficult.

“For one, people want to shoot you down, of course, because that’s the nature of the game.

“And secondly, to actually be at your best is difficult and to maintain that standard in any sporting context your performances are going to ebb and flow.

“To be the best or the number one for a long period of time is very difficult and let’s be right, Jordan’s not playing for one of the best sides in the country.

“There will be a need for him to be performing more often than dare I say one of the top sides where if anything you’re more in line with your England performances, where you’re called upon from time to time rather than sort of regular.”

James said Pope is in a similar boat and impressed during an “outstanding run-in” at Burnley, but it is Henderson that has really caught the former England player’s eye.

The 23-year-old shone during his latest loan stint at Sheffield United and could well be competing with David De Gea to be first choice at parent club Manchester United next season.

“The guy I really do like is Henderson,” James said. “It’s not just about saving, there’s a lot about his physicality, his temperament, which I admire from such a young goalkeeper.

“I think the question for Henderson is what is going to happen next season with regards to what club he’s at because the Premier League is going to have another full season (before the Euros).

“Henderson will have all the opportunities to stake a claim I think. It’s going to be a good battle, put it that way.”

James made his international debut in 1997 and spent a large chunk of those early years stuck behind David Seaman – someone he is replacing as England goalkeeper at next month’s Soccer Aid for Unicef match.

Yaya Toure, Kelly Smith and Patrice Evra are among the other players confirmed for a match that will be played behind closed doors at Old Trafford.

“In my career I ended up playing in Iceland – and sometimes it felt like we were playing behind closed doors there,” James said.

“It’s not going to be a ‘closed doors doesn’t matter if I make any mistakes because no-one will see it’. Everyone’s going to be able to see it!

“I had to sort of contain myself with regards to eating too much in preparation because, again, people will be watching from all over the world no doubt. I want to make sure the kit fits!”

:: David James is playing in Soccer Aid for Unicef 2020, which is taking place in September at Old Trafford, live on ITV and STV. Every £1 donated becomes £3 thanks to the UK government and Gavi, The Vaccine Alliance.