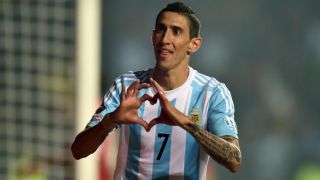 David Luiz is hoping Angel di Maria will be one of several new signings that enable Paris Saint-Germain to challenge for the UEFA Champions League.

PSG are reportedly closing in on Di Maria less than a year after the Argentina midfielder joined Manchester United from Real Madrid for a British record fee of £59.7million.

Brazil centre-back David Luiz has welcomed talk of his former Benfica team-mate arriving in the French capital and expressed his desire to see more new faces join the Ligue 1 champions.

"For us it is always very good if we can sign a fantastic player like Di Maria," said the former Chelsea defender.

"I love him, he is my friend. I played with him at Benfica, when we were young. He is fantastic and will be fantastic for the team. He also knows how to play on the defensive side, he is an amazing player.

"Am I surprised it didn't work out for him in England? No, it's not about this. Sometimes you cannot have luck in one place, but he is still a fantastic player.

"We want to win the Champions League. If it was up to me, I'd like to sign many, many players.

"Of course he is a player that can help us go up another step. It's about details in the Champions League.

"When we played Barcelona last season we arrived in our bad moment and they were at their best level of the season. It can be like that. You need luck sometimes and have all the players available to play."