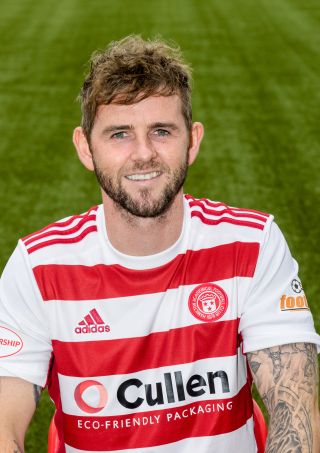 David Templeton admits he would like to hear a lot more from his Hamilton team-mates.

The 31-year-old returned to Accies from Burton for a second spell at the start of the year and now finds himself, along with 32-year-old injured club captain Brian Easton, one of the veterans of the side which has started the season with three straight defeats.

Ahead of the Lanarkshire derby against Motherwell at Fir Park on Saturday, the former Hearts and Rangers winger was asked if Hamilton as a team were as vocal as he would like them to be.

Templeton said: “No, it is something I’m trying get across in training. Because it is quite a young squad, I think some boys are maybe quite shy.

“I try to tell them to demand the ball more, make sure they are speaking and letting their team-mates know that they are on (to take a pass), or maybe if it is me giving the ball away, not to be scared to have a go at me.

“We just need everyone to be at it and speaking to each other. It is massively important.

“You need it in every aspect; organisation, on the ball, off the ball, it is something that you need to do coming into the professional game and it is something we are trying to get across to the kids here and get them to speak up a bit more.”

Templeton believes a win against Well, who are still looking for their first victory after two defeats and two draws, could bolster confidence in the Hamilton dressing room.

He said: “It is still early in the season so it is not the be all and end all but you do want to get points as soon as possible, you don’t want to be down to the last few games and fighting relegation.

“You want to get safe as soon as possible and especially with a young squad, if you are losing games constantly confidence can take a hit.

“We need to pick up points sooner rather than later so we can try and build that confidence. Any derby has an edge, it’s always a bit more hectic and in your face.

“But while I have been here we have always done quite well in them so I am hoping Saturday will be the same again and we can get three points and kick off our season.”