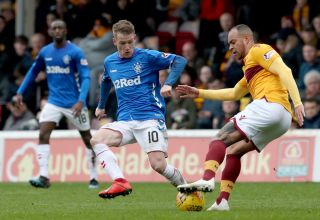 Steven Davis has begun talks with Rangers over a permanent summer transfer.

The Southampton midfielder returned to Ibrox on loan in January and the 34-year-old is a free agent in the summer.

The Northern Ireland international has fought his way into the team in recent weeks after a slow start to life back in Glasgow and he hopes to tie up a deal beyond May.

Davis said: “We have had conversations and that’s obviously something we will look to do. I am just concentrating on the games at the minute but I would like to be here.

“I feel I have got a big part to play, I feel I can bring a lot to the team. I feel we have a hungry group of players who have a real desire to start bringing trophies back to the club.

“There’s been a lot of good work and good progress done this season and we need to try and take that to another level next year.”

Davis only made five starts in the three months immediately after his loan move but got his place back for the 3-0 wins over Hearts and Motherwell after impressing for Northern Ireland last month.

His performances in a deeper midfield role have earned praise from manager Steven Gerrard and Davis is looking to keep the momentum going.

Ahead of Saturday’s trip to face Hearts, he said: “Even for myself, I expected to come in and kick off straight away.

“But when you take a step back and look at the game time I had over the past 12-18 months, it’s not always going to work out like that.

“As the manager says, it’s difficult to replicate the same intensity in training no matter how much training you do.

“We want to build on that now and finish the season as strongly as possible.”