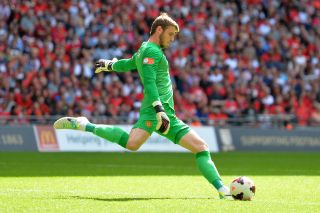 United's emphatic 4-2 victory over Leverkusen in the UEFA Champions League on Tuesday at Old Trafford proved the perfect preparation ahead of this week's Manchester derby.

Facing Manchester City is a fixture that goalkeeper De Gea is relishing as champions United get set for their third high-profile Premier League game in a month following a goalless draw against Chelsea and defeat at Liverpool.

"The victory (against Leverkusen) has boosted our confidence for Sunday," De Gea told the club's official website.

"It was important to kick off with a win; we made a good start and got the three points, which gives us peace of mind.

"We've since had a few days to prepare for City and we're looking forward to the match."

The 22-year-old was also full of praise for attacking duo Robin van Persie and Wayne Rooney, with the latter celebrating hitting an impressive milestone of 200 goals for the club on Tuesday.

"Not only did he (Rooney) score goals, he played some great football, worked hard, brought dynamism to the team and played a really great game," he added.

"It’s good for us that he and Robin score goals. It is important; they are key players and this year they will combine to great effect."